Ever imagined robbing a bank, pinching a valued piece of art from a museum, or using another kind of opportunity to grab the loot while outsmarting the forces of law and order? Most of us are not likely to engage in criminal activities to earn tons of money and power. However, we tend to enjoy the thrills delivered by second-hand bad boy (or girl!) experience delivered with the help of movies and games. There is a way to steal a fortune while staying out of prison and still experience the same excitement. To see how, check out the list of some of the best online gangster-themed slots new slot sites offer in 2017.

We have collected some of the most dangerous games when it comes to the best gangster-themed online slots. Get ready! 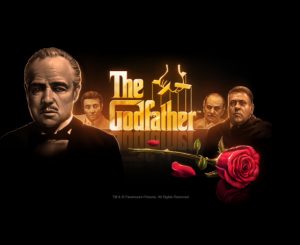 When picking a story for your gangster-themed slot, what better choice to make than this famous, Oscar-winning gangster saga? While the movie delivers one of the most famous cinema lines, WMS has created an offer you’ll find equally hard to refuse. This stunning 5-reels video slot comes with two different themes and 20/25 fixed paylines. Walking into Don Corleone’s office you’ll meet your favourite mobster characters – Don Corleone himself, Luca Brassi and Philip Tattaglia. When randomly gathered into “Family Business” symbol, they will pay out generously. On-reel features are unlocked as you complete achievements, delivering Cash prizes, Mystery Multipliers and additional Wilds. When you eventually enter the famous wedding scene, a completely new set of icons will appear to fit the theme. Wedding Cakes will unlock unlimited Free Spins, combined with stacked Wilds and increasing Multipliers. Action-packed and with visuals and gameplay staying true to the original movie, The Godfather is bound to appeal to those who’ve seen and loved the famous movie trilogy, as well to those who haven’t. If the latter exist at all. 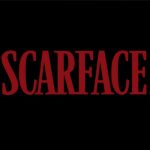 Another legendary movie and another legendary Al Pacino appearance! This time it’s used as an inspiration for a high-definition 3D slot with 5 reels and 20 paylines by NetEnt. Major effort was invested to make theme-specific visuals, incorporating movie scenes and populating reels with the original photographs. An authentic soundtrack on top, you’ll feel as if watching the movie again, minus violence, foul language and drug use. Scarface slot comes with a variety of stacked Wilds depicted as famous movie characters, Tony Montana, Manny and Elvira. Each time they deliver a winning combination, a corresponding scene from the film will get triggered. On top of Nudge Wilds and Free Spins, you’ll get access to a Bonus Game which will award coins for every kill you make. Just so you get in theme-appropriate mood! Range of betting values goes from €0.20 and up to €10, offering an impressive max win potential of 60,000 coins. Doesn’t that make you eager to join the Scarface mob? 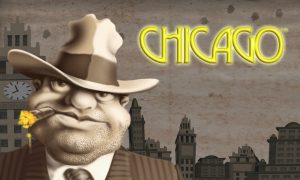 Unlike the previous two, Chicago slot does not stem from a specific gangster movie. It’s rather built on the Prohibition era and famous bootleggers and racketeers the likes of Al Capone. Developed by Novomatic, this 5-reels slot with 20 flexible paylines will take you to 1920’s organised crime scene where you’ll get to play up to 500 credits per line. Reels are set against the old Chicago outline and deliver the merciless gangster, powerless sheriff, corrupt police officer and a few other period-typical characters. Scatters will activate re-triggerable Free Games with the Bottle Shooting Bonus delivered with each winning spin. Game within a game puts the gun in your hands, inviting you to shoot the bottles and grab win Multipliers. The slot comes complete with a gamble function offering multiple chances to double your wins. Interesting features combined with lovely sepia-coloured cartoon-like illustrations make Chicago one of the best Novomatic products. 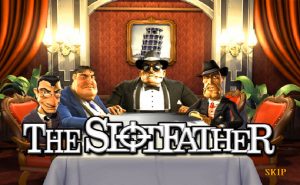 Another take on Godfather theme takes us to early 1900’s when most gambling was still illegal and the first slot machines invented and outlawed. While odds and payouts were then often faked, you can now enjoy a fair game while experiencing the same thrills. Developed by Betsoft, this 5-reels slot allows you to play up to 30 paylines and bet as much as $150 per spin. Your typical mobster crew delivers all the goodies along with some fantastic animation effects. While Sammy ‘Quickfingers’ triggers Sneaky Instant Win and delivers Instant Bonus Credits, Franky ‘da Fixer’ shoots his Tommy Gun to award Free Spins and Multipliers. Slotfather himself activates the Bonus round. He’ll request that you place his slots in various businesses and reward you for a job well done. If you’re searching for action-packed entertainment, look no further! With the help of cleverly designed and wittily animated characters, Slotfather delivers plenty of mob-like excitement. 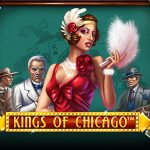 NetEnt brings yet another gangster-themed slot, this time probably inspired by the Chicago Outfit. This Italian-American organised crime syndicate based in Chicago rose to power in the 1920s, under the control of Johnny Torrio and Al Capone. Using a known story as a base, NetEnt delivers a very unique gameplay. You’ll find no standard reels and all the game symbols you’ll see will be playing cards. Winning combinations are made by landing winning poker hands, paying out as of three-of-a-kind. Instead of being delivered by spinning reels, symbols are revealed as cards are dealt. Joker does not only help put together a legitimate hand but also doubles your wins. Uniqueness continues when you see that any card can become a Scatter, if the corresponding label appears over it. Scatters will activate Free Deals and deliver double wins, and provided you play your cards right, you could be cashing out up to 20,000 coins. While the gangster theme is quite soft, a very innovative gameplay will make you feel like you’re paying slots and poker at the same time.

Dog as a Godfather? Well, why not?! It could be more than meets the eye happening in the canine world. This witty interpretation of a famous movie theme was developed by Microgaming and comes with 5 reels and up to 20 paylines. Mobster characters are represented by different dog breeds, cigar-smoking bulldog leading the pack. The Dogfather Wild delivers highest symbol payout, while Scattered Itchy da Flee activates re-triggerable Free Spins and triples your wins. Appropriately, you get to mark your territory with the help of Hydrants and enter a pick & choose game to reveal your bet Multiplier. This lighthearted mafia-themed slot is loads of fun to play and gives numerous chances of more-than-decent wins. They say a loving dog is a man’s best friend but a generous Dogfather could make you 39,000 coins richer before you can say knife.

Picking out the correct criminal will award the cash prize at the top of the screen while choosing the wrong one carries a penalty. As you’re spinning the reels and trying to catch the criminals, extra Wilds will pop up whenever the cop appears next to a thief. Cops N’ Bandits allows you to bet up to $750, an amount high-rollers are bound to appreciate. Before you go for the big prize, enjoy the highly entertaining intro video which introduces you to slots main characters.