Music is one of the greatest things in life. It can invoke so many emotions from just a few bars or chords. Happiness. Sadness. Anger and more. Of course, there are a multitude of bands, groups and singers out there who are bringing music to the world. And why shouldn’t these musicians also have their works of art placed into slot games? Well, fortunately for all of you gaming music lovers out there, some of them have been. So whether your favourites exist within rock, pop, R&B or any other genre, perhaps there’s a slot game for you to play. However, with such a wide range of games available in this category, you might want to view this list first. It’s the best music-themed slots that are available across UK slots sites launched recently.

If you are interested in the most popular music-themed slots, check out the following list of online slots:

Who hasn’t heard of the glam rock band known as KISS? They came together in New York in 1973, formed by Paul Stanley, Gene Simmons, Peter Criss and Ace Frehley. And, of course, the band are responsible for such hits as Rock and Roll All Nite and I Was Made For Lovin’ You<. This online slot game from WMS brings you visuals of the group in all of their glory. And every time you spin its reels, you’ll listen to clips of some of their best hits. Icons that appear on these reels include imagery of band members, a guitar and a plectrum. Additionally, alongside the main five reel and four row set, there’s a colossal reel set. This stands at five reels and 12 rows large. On each of these sets, you’ll also find special icons like the wild symbol. This substitutes for all other symbols, with the exception of the feature icon. And speaking of this one, it comes in the form of the KISS logo. As it stands, this appears on reels one, three and five of both reel sets. Should you spin three or more into view, you’ll trigger up to 20 freespins and a multiplier!

If there’s a game about KISS, then there has to be one about Guns N’ Roses. And sure enough, Netent are able to present this one up to you. As you play, you can select from the choice of five of the bands most famous songs to play. These include Paradise City>, Sweet Child O’ Mine and November Rain. The first of the game’s symbols are the regularly seen A, K, Q, J and 10. Joining them are three of the band’s members and two different plectrums. The game also has a huge amount of special features in it to make things exceptionally interesting. There’s a standard wild symbol to start off with, which is the band’s logo. These can appear randomly on any reel, except the third and stand in for all others. The only exception being the bonus icon. And three bonus symbols appearing anywhere on reels one, three and five will randomly award one of three feature rounds. These are the Crowd-Pleaser round, the Encore Freespins and coin wins. The Appetite for Destruction Wild and Legend Spins are additional randomly activated rounds!

You can’t think about the 60s without thinking about Jimi Hendrix. The American rock guitarist, singer and songwriter only had a mainstream career that spanned four years. However, this was still a long enough period of time to catapult himself into the public eye. Fortunately, his legacy still lives on to this day. And this is especially true in Netent’s game of the same name. Of course, the Sixties was a period of hippy music and peace among mankind. Therefore, the reels feature icons of hearts, flowers, eyes and music imagery. As is common with Netent games, this one features a great deal of specialities. To begin with, there’s a wild icon in the form of Jimi himself. This stands in for all others, except for scatter icons. There are two features that can be activated during the main game. These are The Purple Haze feature and the Red Guitar Re-spin. The former triggers when the Purple Haze symbol lands on reel one. If you bring four or more Red Guitar icons into view, the relevant feature triggers. This re-spins the reels once. Finally, the scatter icon triggers the Pick and Click feature when three or more show up on the reels.

The English rock band which was formed in 1975 by singer, bassist and songwriter Lemmy have also been in this Netent offering. Motorhead are exceptionally popular for such songs as Ace of Spades, Bomber and No Class. What’s great about this game primarily is that you can switch the ‘Rock Mode’ on. This plays some classic Motorhead tunes while you spin the reels. Symbols in the game include silver bells, gold stars, red number sevens and a host of others. Furthermore, you’ll be privy to the game’s Mystery Reel feature. On every spin in the main game and freespins, one or more reels are mystery. If any mystery symbols show on the reels by the end of a spin, these transform into one random symbol. There’s also a Bomber Feature which can trigger at random before a spin in the main game. Each bomb has a cluster of mystery symbols within. Finally, if you spin three scatter symbols into view on reels three, four and five, you’ll receive 10 freespins as a reward! 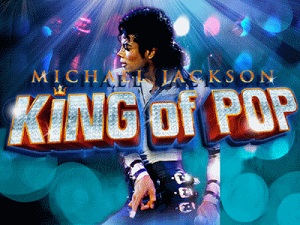 Known as the King of Pop, what would this world be without an online slot game about Michael Jackson? Fortunately, Bally thinks in the same way that we do. Therefore, this game is available to players to moonwalk their way through. And every time you spin the reels, your ears get to hear one of the singer’s classic songs. Naturally, the reels incorporate symbols of the iconic vocalist’s trademarks. These include his sparkly gloves, shiny black shoes, hat and sunglasses. Joining them are icons of the regularly seen A, K, Q, J, 10 and 9. You’ll also find that there are speciality rounds and features in the game, starting with its wild icon. This is the image of Michael himself with the word, ‘BONUS’ written across it. These can initiate the Wheel Bonus. One spin of the wheel is given where you can win freespins, credits or credits with an additional spin. There are also two different wild icons in the game alongside. These are the standard wilds and the stacked wilds.

And lastly on this list, what would the music category be without a game centring around Elvis Presley? This one – another offering from WMS – offers itself up on a bright blue background. It features a unique reel layout, which incorporates various different symbols. Elvis himself appears in different formats as the first of its icons. There’s also symbols of a guitar, a hound dog, blue suede shoes and a purple teddy bear. All references to his songs. Every time you spin the reels, an Elvis number will play and hordes of screaming girls will flood the game. As well as the regular symbols appearing on the reels, you’ll also find a wild icon. This substitutes for all others, with the exception of the feature offering. And speaking of this one, the feature icon exists as a vinyl record. This one pays out a multiplier to your wager. 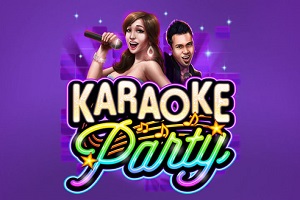 Microgaming, one of the biggest and most recognised names in the gaming industry have released yet another online slot and this time it holds a very musical theme. There’s no need to sing your heart out to win – just head to the very latest slot and try your hand at winning the non-progressive jackpot that’s certainly worth making a song and dance about.

This 5 reel, 9 payline slot allows you to play from as little as 0.01 and as much as £45 a spin – the more you stake, the higher your potential jackpot will be. Get your hands on scatters, free spins, wilds and so much more when you play the latest musical and potentially rewarding slot to hit the online casino world.

Karaoke Party online slot has a very electric party atmosphere about it, whilst you play it’s almost as though you’re in a club – thanks to the various images within the game. You’ll encounter a singing lady, a dashing singing fella, a couple dancing together, a girl band and a boy band made up of three singers plus your usual 9, 10, Jack, Queen, King and Ace symbols.

There are various features with this online slot, some of which don’t actually go with the overall design of the game – the creators have kept it simple but fun at the same time. On your screen you can choose to autoplay, to allow you to sit back and watch the action unfold, change your bets and view the paytables before you even start.

To win is simple, you choose your stake, spin the reels and hope to get at least three of the same symbols on your paylines.

If you’ve come looking for big payouts, you need to bet the maximum bet per line to give you the chance of grabbing the total amount of cash on offer.

By playing smaller stakes, you will get some decent wins back, providing you can get the free spins feature often – or if you manage to spin in the jackpot symbols.

You can win a whopping 3,333x your stake, meaning a potential win of 150,000 if you can trigger 5 of those ‘Jackpot Party’ jackpot symbols on your paylines.