Jack in a Pot Slot Review 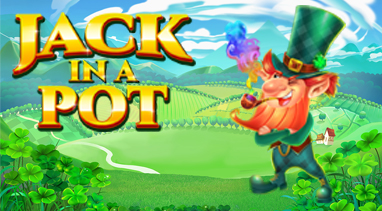 The iGaming industry holds many a software developer, some of which have become almost legendary in their popularity over the masses. However, while these golden brands always seem to make the headlines, there are other, newer brands that also create content worthy of your attention, brands such as Red Tiger Gaming.

Having launched in 2014, they’re still seen as one of the newcomers of the industry, and yet they’ve put out a lot of content since their founding. As a result, they’ve become a big name in European and Asian iGaming. This could be argued as to why there’s a lot of hype surrounding the upcoming release of theirs, titled Jack in a Pot. Sporting an Irish theme, this 7 reels cluster wins title is sure to get hearts pumping faster, not forgetting that it should help to make your wallets fuller as well. Jack in a Pot is a mean green machine, decorated with whimsical imagery and a fun little leprechaun to move us through the payouts of the game.

Will you have the luck of the Irish? Let’s find out!

Seeing as how there’s still a few days before it hits our devices properly, a lot of the game symbols are being kept under wraps, and so we only know the bare minimum. However, while that’s the case, we do know that there’ll be a standard paytable of cash payouts, as well as a series of special features.

A lot of these symbols are card suit icons made to fit the theme of the game, tiles we’d associate as being lower of value, while there’s higher value symbols that have unique imagery related to the theme. This is standard for any one armed bandit, with only the brightness of the colours really giving Jack in a Pot its own flavour when compared with other online pokies. Although we’ll go into greater detail later, you can expect to experience wild icons, flowing beer, and golden coins raining down upon those 7 reels.

Playable on mobile and desktop devices, this game features much the same gameplay you’d have come to expect of Red Tiger: a combo of wins will generate varying wins, with some leading into mini games. The only real difference here is that the winlines have been turned into cluster pays, meaning that where wins can fall, and how often, is more unique than your typical penny slot.
What also separates this title from others is that the volatility is rather high, even in spite of cluster pays, but that the hit rate is even higher, and so you’ll be challenged when playing, but the pay off will be more than worthwhile. The biggest trial before you will be landing those clusters so that the mini games activate, or so that you get a mega win payout, symbolised by the leprechaun himself.

We’ve mentioned bonuses quite a bit so far, yet not really gone into much detail; unfortunately, that will continue, as Red Tiger aren’t giving away many details just yet. Nonetheless, while we can’t tell you exactly what to expect, we can ready for you for a wide array of special features, some of which are free spins, while others are different in nature entirely.

One of the main features you’ll come across is that of the Magic Pipe, Beer, and Hat, which sit next to some of the grids rows, and have the power to change the reels altogether. The question on everyone’s lips, including ours, is how do they do this? We’re assuming that there’ll be some sort of expanding wilds, or maybe the ability to change corresponding symbols into other big money winners. Whatever the final outcome, it would appear that users will have a lot of play time on their hands once they get started, many of which go beyond the generic conventions of free spins.

We don’t mean to sound like a broken record, but sadly the lack of specific details will continue as we go into this section. Nonetheless, just like before, we know just enough to make us hungry for more, like a big payout of x2,000! That’s right, this game is really going to be that pot at the end of a rainbow, as the maximum amount you can win is a chunk of gold. Of course, for that payout to be worthy of you turning into a highroller, it stands to reason that your bet will likely have to be high in nature as well, which could leave budget gamers out in the cold.

In regards to basic returns, again, we simply don’t know, though we suspect that the lower value card suits will only offer minimal rewards, while the themed icons will have you rolling in piles of gold coins.

Honestly, with it being such early days, a solid verdict is hard to come by, as so much is still an unknown. That being said, from the few tidbits we’ve uncovered, and been able to test drive for ourselves, it would seem that Jack in a Pot has a lot of potential, especially when it comes to bonuses. It’s a big game, with big reels, cluster wins, and several special rounds, all of which sound pretty amazing to us. But will it all work harmoniously together? That’s what we’ll find out over the next couple of days, when Red Tiger Gaming finally drop this long awaited Irish themed goodie.

If you can’t wait until then, you van visit the Red Tiger website for more details, though be warned, you won’t find everything you seek… at least not until that counter has counted down to launch day!