Easily regarded as one of the best iGaming brands to hit the market, Yggdrasil has made waves within the industry, with the label always creating high profile pokies. For such a young company, the amount of followers it’s garnered has ensured that Yggdrasil is now seen as one of the iGaming brands to seek out and play. If you take a look at its titles, such as Penguin City, it’s not hard to understand why the brand has gone from strength to strength since its launch in 2013. 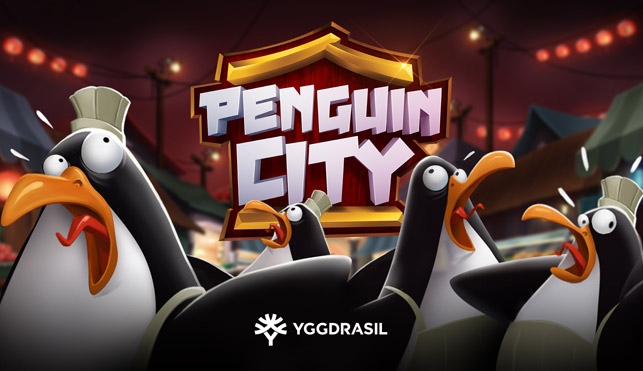 Don’t let the name of this pokie fool you, while penguins are most certainly involved, the environment is far from chilly, as this is an oriental themed slot machine. Surprising though it may be, it ensures that users receive an unexpected experience, one which is decorated with high quality graphics, 3D characters, and traditional oriental music. We suspect that even those not normally in favour of such themes will want to play, as the entire interface is simply so enticing.

When it comes to the paytable, there’s a lot going on, as the game is filled with bonus features, high wins and low wins. However, once you move past the sheer amount of diversity, you realise that the monetary wins, removed from any of the mini games, can be on the high side.

There’s 10 symbols altogether, with the high value ones taking the form of traditional food dishes you may see on Asian market stalls, while the lower value tiles are nothing more than card suits. Although it would have been nice to have the theme better integrated for the low value symbols, the overall effect is still a good one. In addition to the standard symbols, there’s also the wild, which asks as the main bonus bringer of the game; it turns a convention on its head, helping to refresh a predictable iGaming format.

Before we even spin the 5 reels, it’s important that you’re aware that there’s no winlines within the game but rather ways to play instead, 243 of them to be exact. This type of setup can be seen as a double edged sword, as the 243 ways to win provide better variance and thus greater opportunities, but it can also mean that landing a win can be harder due to the enormity of the matrix. We spun for several rounds without a single win, and so the volatility is on the high side.

Nevertheless, once you know how the 3×5 grid works, you can start by placing a bet of 0.10 credits, the lowest wager any user can make. This amount can be increased all the way up to 125 credits, should you be feeling particularly brave, however please note that a higher bet won’t increase the value of the symbols. Provided you’re ready to play, you can either be hands on and spin the reels yourself, or opt in for autoplay. All it takes to make a win is a three of a kind victory, with a five of a kind landing the more generous returns.

As we touched on earlier, the wild icon is where the magic of this slot happens, with it acting as both a sticky wild, and a means of entering into The Penguin Escape Mode, i.e. the main mini game of this slot. Also, when inside this feature game, the wild can then become stacked, which can lead to even greater wins.

Wilds can only land on the second and fourth reels, however once they’re part of a winning combination, they start to make the game their own; should you trigger the bonus feature, you’ll partake in some tomfoolery as the penguins try to escape the kitchen they work in. The matrix remains, only now instead of the market setting we’re presented with a kitchen, with the penguins needing to cross from one side to the other. Sometimes the penguins will manage to escape, leading to extra wilds being placed on the grid, and even symbol swaps, but at other times they’ll fail and fall down a gap between the kitchen counters. It’s a fun feature, one that really cements the modernity of the title.

In regards to how much you can stand to gain, the high value symbols are where the most money is, though even then you won’t win more than 250 credits for the top scoring icon. And, of course, this amount is for the five of a kind win and not the more likely win of three matching symbols. Consequently, the wins are small but decent, if the grid plays fair and grants you luck, if not, you could end up with low end wins of no more than 70 credits. That’s still a fair amount, but it’s not exactly the BIG win of anyone’s dreams. Our advice would be to play with the minimum bet amount, that way you don’t spend too much, but can still walk away with comfortable wins.

Looks wise, Penguin City won’t easily be beaten, even by other Yggdrasil games – it just has so much character and depth that, when you play, you feel part of the world on your screens. Moreover, you also have a fun, hands on mini bonus to work with, which helps to create a mini narrative you can almost follow like a story. That being said, as far as money goes, the returns aren’t as large as some of the old school titles out there, with Yggdrasil having chosen to be about entertainment rather than monetary gains. Personally, we prefer this, but we can appreciate that some gamers will want more bang for their buck.

If we were asked to rate this out of five stars, we’d give it a four and a half, with the only reason for missing the full five marks being due to the size of returns, and the harshness of the volatility. Still, that’s not a bad rating for a pokie, especially one from a relatively young brand, and so Penguin City gets the full thumbs up from us.