Maybe you’ve heard the old saying about the luck of the Irish? While the saying does harken back to the days of miners, it’s commonly known to mean good fortune these days. Of course, this has become a major influence on slot game developers. Many of them take on an Irish theme, bringing icons and imagery of lucky charms and fortunes to your screen. These include Leprechauns, four-leaf clovers and horseshoes, amongst others. And if that wasn’t enough, most of them also include authentic-sounding pieces of music in them. Therefore, you’ll get the full Irish experience when playing most of games in this genre. So, join us as we look through some of the best slots in this category.

This one has a very obvious theme behind it, as you can tell from its title. Lucky Leprechaun presents players with a background setting of green fields and blue skies. Not only that, but it features five reels, three rows and 20 different pay lines. Developer, Microgaming, has made sure to insert various icons relating to Irish origins as well. These include pints of Guiness, a fiddle, a smoking pipe and the Leprechaun itself. Of course, any game that bases itself on luck and fortune should also feature some intriguing specialities alongside. To begin with, you’ll find a wild icon also appears on the reels. It’s the game’s own logo that represents this and it appears in stacks during the base game and freespins. Wilds will substitute for all other symbols on the reels, except for the bonus icons. It’s the pot of gold which represents this icon. Three, four or five of these trigger the Trail o’ Fortune Bonus round. RTP: 95.5%

If you’re a seasoned online slot gamer, Rainbow Riches will no doubt have come across your radar before. It’s one of the most known offerings in this genre, having been around for a considerable number of years now. It comes to your computer screens courtesy of Barcrest and its icons begin with the A, K, Q, J and 10 options. There are additional symbols joining these, but they all provide it with its special features. To begin with, there’s a wild icon in the form of a gold coin. This will stand in for all other icons, except for the three remaining speciality symbols. There’s an icon of a Leprechaun in the game too, with three or more of them coming into view anywhere triggering the ‘Road to Riches’ feature. This requires you to move along the cash path to collect cash prizes. There’s a wishing well symbol as well as a pot of gold offering alongside. The latter of these features gold, silver and bronze pots spinning around the screen. You need to stop an arrow on one of them to win. RTP: 95%.

Why wouldn’t you play a game that has the title of Golden Shamrock? And not only does its title give great intrigue, but it’s also made by Netent. This means you’ll have some great graphics on display while you play. It also has a great soundtrack that fits in perfectly with the overall theme. And it’s also visually appealing, with its symbols of a horseshoe, a pot of gold, an accordion and a Leprechaun’s hat. There are several more icons available alongside these. And when it comes to special features, Netent are one of the best for these. This game has a Leprechaun icon which acts as the wild for the game. These will expand when it appears on reels two, three or four. Then, there’s a golden shamrock scatter symbol. Three or more of these on the reels will activate the freespins round. This will give you the chance to win some huge pay outs. RTP: 96.4%.

Again, a game that features such a title can only be exciting and intriguing to play. This offering can be found on new slot sites running on Playtech and is full of enticing graphics and specialities. It has the appropriate Irish charm within, which is obvious every time you spin the reels. Speaking of which, these exist as five strong, with three rows to go alongside. Not only that, but there are also 30 paylines in the game for you to wager on. And don’t forget about its icons of lucky horseshoes, harps, rings and Celtic knots. There’s a red-haired Celtic woman on the reels too, and she is the game’s wild symbol. As such, she will substitute for every other icon in the game, except for the pot of gold. And as far as the gold pots go, these are the bonus icons. Three or more them will trigger the game’s bonus round. It’s this round that provides you with eight freespins initially, but you’re able to earn additional ones. There are up to 33 freespins available to you altogether. RTP: 95.05%.

Cozy Games have also brought out an Irish game, offering up this one with the title, Irish Gold. Its reels feature harps, jars of beer, toadstools, pipes and golden shamrocks, amongst others. Everything comes in a great and high quality design, with a groovy soundtrack playing as you spin. The overall layout of the game is on display via a five reel and three row layout. Gamers are able to place bets of up to €30 per spin and there’s an ‘Auto Spin’ button available too. As far as specialities in the game go, you’ll find a fairy acts as its wild offering. This stands in for all other symbols on the reels, with the exception of scatter and bonus icons Scatters come in the form of the Leprechaun icon and when three or more come into view anywhere, you’ll trigger the wishing well bonus round. You receive a single pick for each scatter in view and each pick awards up to 10 freespins. Finally, don’t forget about the bonus icon, which is the path towards the pot of gold. Three or more of these trigger the ‘Road to Riches’ feature. Simply spin the wheel in this round and advance along the trail towards the gold! RTP: 95% to 95.42%.

This one may look a little less graphically superior to the others on this list, but it’s every bit as entertaining. It includes five reels and three rows as well as a total of 10 separate pay lines. Bets of up to €500 per spin are able to be in play at any time and there are the regular symbols of A, K, Q, J and 10 within. Gemstones make up the remaining standard icons alongside these. However, the game also has a feature known as ‘Fortune Spins’. This can be brought into play when you use the relative button at the bottom of the screen. This provides you with four different sets of reels and you get to select a fortune bet of between €2 and €500 for four spins. Plus, there’s a special icon in the game which transfers across to all reel sets whenever it appears. This allows you the chance to win large pay outs. And don’t forget about the game’s apt soundtrack as well. It gives you a great and authentic Irish experience. RTP: 95.23%. 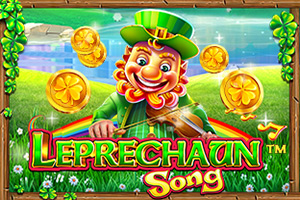 Those who need some famous luck of the Irish in their lives should definitely try the Leprechaun Song, a slot released by the same developer, only this time with a slightly lower RTP of 96.46% and more frequent payouts.

The session starts with 10 free rounds and an x2 multiplier; before the spins are set into motion, the players will get to pick the mushrooms and reveal additional prizes such as more spins, multipliers, or Wilds, generated by a random icon.

Coin Collector bonus also features the x2 multiplier and activates 15 Free Spins, with more rounds coming your way thanks to the progressive feature – every time the players collect a coin, one point will be awarded, adding 5 extra spins and increasing the multiplier for the total of 5 points.

Another random feature is the Giant Symbol bonus that comes with a huge 3×3 icon block that lands on the reels 3 – 5 in the first spin, 2 – 4 on the second spin and 1 – 3 on the third spin.

Other bonuses that can be unlocked after every base game spin are:

The only downside of the features is that they cannot be re-triggered while in progress.

Wish Upon A Leprechaun 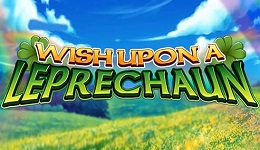 Blueprint Gaming has launched their Wish Upon A Leprechaun video slot and by the looks of it, the game just might surpass all the other popular Irish-themed slots out there (and there are a lot of them). The medium volatility slot is set in little leprechaun’s wooden cottage in a clover field, with rainbow colours overflowing the sky. The jolly ginger fellow stands by the reels and jumps with happiness every time a winning spin happens and a nice Irish melody accompanies the gameplay. However, it’s the jaw-dropping graphics and 5 exceptional bonus features that make Wish Upon A Leprechaun a desirable slot.

There are 5 reels and 3 rows, completed by 20 winlines. When it comes to special features, we don’t even know where to start. For one there is the Lucky Charms Bonus, with 5 different modifiers. They will introduce Infectious Wilds, Colossal Spin, Spin Streak, Bonus Boost or They Think it’s all Clover bonus. Furthermore, 3 bonus pot of gold symbols trigger one out of four amazing bonus rounds: Chests O’Plenty, Nags to Riches, Clover Rollover or End of the Rainbow Free Spins. Let’s not forget the Jackpot King progressive!

Every day can be St Patric’s day or at least feel like March 17, with the sounds of traditional Irish music blasting in the background.

Played on a 5-reel, 243-payline base game structure, Rainbrew introduces two extra reels placed at the top and the bottom of the game screen; these are called Sidewinders and can be activated when the Wild icon appears on the screen. This will boost the winning potential, increasing the number of active lines to 576 is one of the Sidewinders is active or 1,125 when both of them are set into motion.

Free Spins will be triggered when the Scatter icons land on the horizontal reels or in columns 2 and 4. During the bonus rounds, both Sidewinders will be active and if Wild icons land on the same positions on the horizontal reels they will expand and connect, further increasing the winning chances. The expected return to the player percentage is just slightly above 96% and the total payout can amount to 136,035 coins.